Pressure vessels in chemical plants often encounter defects such as corrosion, cracks and deformation. Operators must conduct regular technical inspections to eliminate hidden dangers as early as possible to prevent defects from continuing to develop and affect production.
1 Corrosion 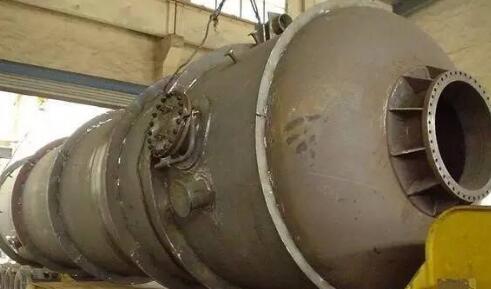 Cracks are one of the most dangerous defects in pressure vessels, which are factors that cause brittle fracture of the vessel, while at the same time promoting fatigue cracking and corrosion cracking.
Crack Types The cracks in the pressure vessel can be roughly divided into two categories according to the formation process, that is, cracks generated in the manufacture of raw materials or containers and cracks or extended cracks generated during the use of the container. The former includes rolling cracks of steel sheets, cracking of containers, weld cracks, and stress-relieving heat treatment cracks; the latter includes fatigue cracks and stress corrosion cracks.
The raw material rolling crack is a linear defect generated by rolling due to the accumulation of defects such as looseness, shrinkage cavities and non-metallic inclusions existing in the metal material itself. This defect can be in the interior of the material or on the surface without any directionality or fixed location. Similar cracks are often found in some small, high-pressure containers that are drawn.
Welding cracks are mainly produced during the manufacturing process of the container. This is due to the fact that the quality inspection of the container manufacturer is not strict, or the original defects are slightly undetected and developed during use.
Stress-relieving Heat-treated cracks are branched intergranular cracks that are produced during post-weld stress relief heat treatment and can also be extended during use.
Fatigue cracks are caused by poor structure of the container or defects in the material, causing local stresses to be too high. Cracks are generated after repeated pressurization or pressure relief of the container. Such cracks can be found in some pressure vessels with frequent opening and closing. .
Corrosion cracks are formed by corrosion of a corrosive medium under certain working conditions. The cracks are often related to stress. Because both stress and corrosion promote each other, the latter creates a stress concentration on the surface of the material, or weakens the intergranular bonding force of the metal, while the former accelerates the progress of corrosion and causes the surface notch to develop deeper.
Although the crack of the pressure vessel may exist in various parts of its inner and outer surfaces, the most common crack occurrence is the weld and the heat affected zone and the local stress.
Treatment methods Crack inspection can be performed by visual inspection and non-destructive inspection. It is generally found through visual inspection that the signs of cracks are found or initially detected and then further confirmed by non-destructive testing. Non-destructive testing, whether it is liquid penetrating flaw detection, fluorescent flaw detection and magnetic flaw detection, has a high effect on the inspection of surface cracks, and can be appropriately selected according to specific conditions.
When the pressure vessel is found to have crack defects, the cause of the crack should be analyzed according to the location, quantity, size, distribution of the crack and the working conditions of the vessel. If necessary, metallographic examination can be carried out to judge the crack as the defect of the raw material. , or left in the manufacture of the container, or produced during use. The defect or the container handling method for the defect is then determined based on the severity of the defect and the specific conditions of the container.
Due to the microcracks left by the rolling or drawing of the material, it is generally shallow and can be rubbed by hand or by a grinding wheel. Welding cracks should be removed when inspections are found.
Parts that are cracked due to poor structure and excessive local stress are generally not suitable for continued use. Containers with corrosive cracks should not be used after the cracks are removed or repaired.
In special cases, cracks caused by container manufacturing or raw materials are indeed difficult to eliminate, and are inspected and qualified by a qualified pressure vessel defect assessment unit, and according to the analysis and calculation of fracture mechanics, it is confirmed that the crack does not expand and is sufficiently safe. Margins, containers can be reliably monitored and continue to be used, but the inspection interval should be shortened to closely monitor the development of cracks.
3 Deformation

www.secmachinery.com is one of the leading china filtration equipment & sanitary stainless steel pressure vessels manufacturer, with professional factory. We focus on the sanitary pressure vessels, filtration equipment research and development, manufacturing, sales and service since the company been established. Our products is widely used on bio-pharmaceutical, food and beverage, fine chemical industry.

If you want to have more information about the article or you want to share your opinion with us, contact us at [email protected]secmachinery.com